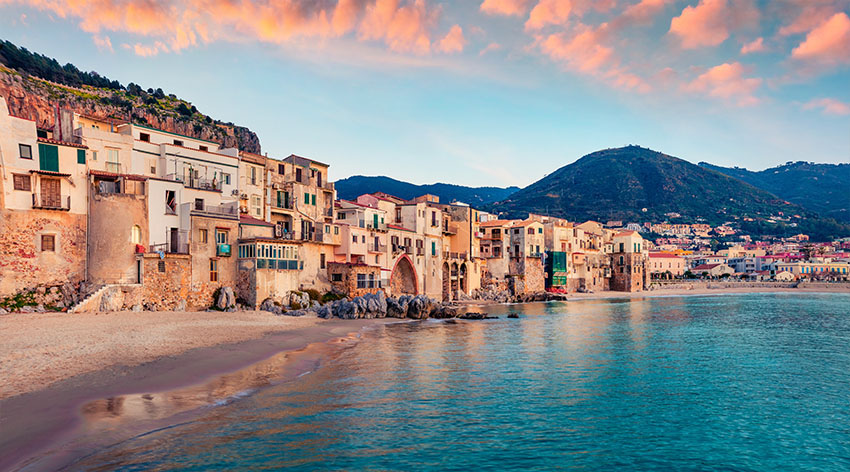 Regarded as one of Italy’s top destinations, Sicily is located right off the Italian mainland, with less than two miles of water separating it from the Calabria region.  Sicily is the largest and most densely populated island in the Mediterranean Sea. It receives the African desert warm currents, while the mountain ranges that run through Italy help protect it from the cold from the north.  This is one reason that the island, which is on the same basic latitude of Pennsylvania—has a much warmer climate, with sultry summers and mild winters, making it a cherished destination for Europeans throughout the colder months.   There’s something to be said for swimming in the Sea in winter!

Sicily lies in close proximity to many other countries and cultures, which has made it a destination often conquered—and often traded with– over the centuries.  Today’s Sicily is a melting pot of what has been and what is again, a testament to the changes since its first inhabitation over ten thousand years ago.

On the northwestern edge of the island you’ll find Palermo, the region’s capital. The city is famous for its one of a kind historical landmarks—including the UNESCO world heritage site that is Palermo Cathedral–  and simple yet satisfyingly decadent fare.  Take a tour of the Capuchin Monastery and explore the creepy catacombs filled with mummies that have been perfectly preserved for centuries, some of them still wearing the original garbs they wore hundreds of years ago.

One thing Americans may find of particular interest in Sicily is just how familiar—if still different—many of the food offerings seem. Many of the Italian immigrants coming to the United States in the late 19th and early 20th century came from the south of Italy, and in particular from Sicily.  They moved to large American cities like New York, Philadelphia, Chicago, Boston and San Francisco, bringing their food traditions with them and adapting the ingredients to what was widely available in their new home.  Sicily’s influence on Italian-American cuisine can be seen today still in chicken parm (seldom found in Italy, but adapted from Sicily’s eggplant parmigiana); garlic bread (adapted from bruschetta); cannoli and even the muffaletta sandwich paying homage to Sicily’s baked muffuliette rolls.

Walking through the island you’ll see dozens of flags carrying the Sicilian symbol of a female head with three legs attached to it. The woman represents Medusa, while the three legs attached refers to the three capes Sicily: Peloro, Passro and Lilibeo. Within Medusa’s snake hair you can spot stalks of wheat, representative of the islands contribution of wheat during Roman times. Sprinkled across the island are Roman and Greek ancient ruins, including plenty of temples and theaters.

Sicily is unlike anywhere else in the world, and a singularly warm and welcoming destination in winter.