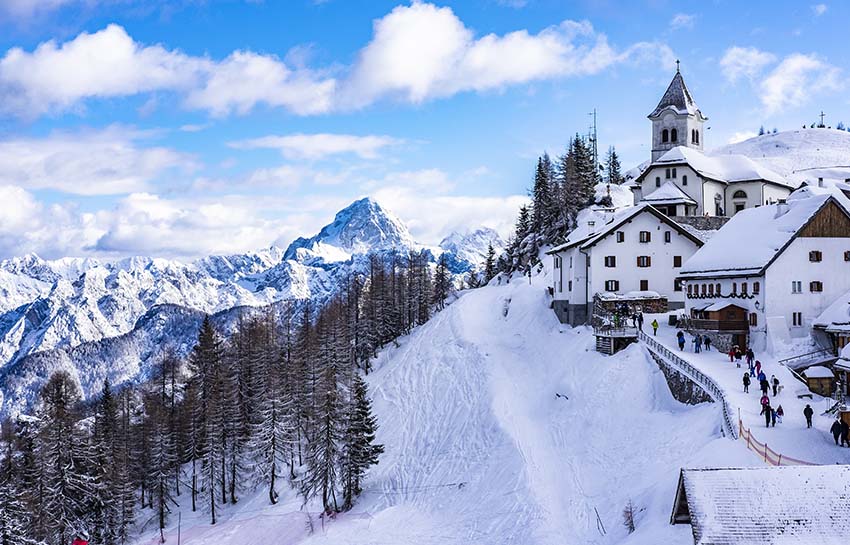 Friuli-Venezia Giulia (English name same, pronunciation freeOOlee vehnETZyah JOOLyah) stretches on the map up and to the right from the rest of Italy.  It is in fact the farthest northeastern region, with part of it is almost entirely surrounded by the country of Slovenia, and bordering Austria as well.

Despite its relatively small size, Friuli-Venezia Giulia boasts great complexity of terrain, history, language and food.  Anyone lucky enough to visit will find themselves surrounded more so by locals than in almost anywhere in Italy—the region typically hosts only around 2% of all visitors to the country, and most of those visits are concentrated around the capital, Trieste (tree ESS teh), the coastline, and ski resorts.

Beaches, mountains, lakes, forests—it’s no wonder the region is called The Land of Contrasts.  From the extraordinary sharp peaks, broken crests and jagged limestone ridges of the Dolomite Mountains (18 of which rise to more than 10,000 feet above sea level), through the mountain passes leading to the valleys lying below and stretching to the narrow seacoast along the Adriatic and the port city and capital of Trieste (called Italy’s Most Beautifully Haunting City by the Wall Street Journal), Friuli-Venezia Giulia is unique.

Italian is an official language in the region—but so is Friulian, spoken by more than half a million persons and so distinct and divergent from Italian (or any other language, for that matter) as to merit being classified completely separately, as well as Slovene and German. Food influences come not only from Italy but also the bordering countries of Austria and Slovenia.  You can see this influence in the region’s famous bean and sauerkraut dish Jota as well as the particularly Trieste version of goulash;  Frico is a traditional succulent, rich pancake-like dish made with local cheese, potatoes and onions cooked until crisply on both sides.

On a sweeter, and more commonly recognized note– tiramisu.  It may surprise you to know that not only is this dessert of coffee-soaked ladyfingers layered with mascarpone cream a relatively new invention, but also that it is officially recognized as a Prodotti agroalimentari tradizionali (traditional agri-food product) of Friuli.  There is lively debate about the true birthplace of the dish, but its status as an icon of Italian desserts is undisputed, as is the meaning of its name:  tirami sù, which translates literally as pick me up– an apt nod to the entrancing combination of sugar, coffee liquor, and Savoiardi biscuits—what Americans call ladyfinger cookies.