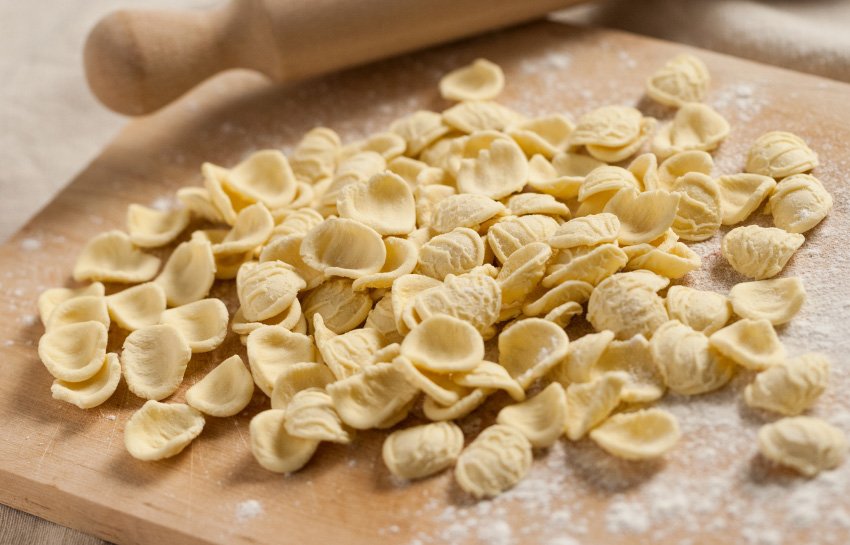 The most delicious “small ears” you’ll ever eat hail from Puglia, Italy. Orecchiette (oh-reck-ee-ET-tay) is a pasta unlike any other, largely due to its interesting appearance. The word Orecchiette literally translates to “small ears” in Italian, a nod to its striking resemblance. Unlike other common kinds of pasta that take on the traditional long noodle form, the Orecchiette’s concave bowl-like disk shape and shallow ridges across its sides allow for sauce to easily cling to it, providing maximum flavor in every bite. Other than its one-of-a-kind look, the rich history and longtime traditions behind the pasta differentiates it from any other Italian dish you may have tried before.

Orecchiette was invented sometime around the 12th and 13th centuries in Bari, a city within the southeastern region of Puglia, Italy. While most of the information surrounding its origins remains unknown, historians believe its inventors were heavily inspired by the bricks making up the roof of the Trulli, which are ancient dry-stone huts with conical roofs.

While the pasta may have originated over 700 years ago, the tradition of Orecchiette making is alive and well, thanks to the groups of Puglia citizens that still make the pasta today. The artisans spend their days working outside, sitting lined up beside each other in front their apartment doors. At the beginning of a typical workday, they lay a large piece of simple, three-ingredient dough— made by mixing hard wheat flour, water and salt— on a clean, flour-dusted tabletop. Throughout the course of their “shift,” the pasta makers work their way through the dough, rolling out the pasta, one grape-sized piece at a time.

For every small piece of pasta dough, the maker drags the edge of their knife against it and a wooden board, flattening the dough and creating the traditional shape while using a modern approach. Other artisans prefer to stick to ancient methods, maintaining the authenticity of the pasta making traditions as much as possible. The traditional method includes using light pressure to roll their finger over the dough. During the process, the thumbprint creates an imprint on the pasta. These small ridges molded into the dough to create more surface area for the sauce to envelope and pool inside the crevices. This craft has been passed down through generations of Italians, creating a tight-knit community of Orecchiette enthusiasts that work together, laugh together and often live next door to one another.

Orecchiette is used in several traditional Italian dishes. After boiling the pasta for around ten minutes, the chef can decide which flavorful route they’d like to take next. If you want to keep things simple and light, a drizzle of olive oil tossed with assorted sautéed vegetables would provide for an amazing meal. If you’re a meat lover, try pairing the pasta with a ragù sauce, or try mixing in some tomato sauce and tiny meatballs for an even heartier meal. But for those who strive to stay true to tradition, the best dish to make is Orecchiette Alle Cime di Rapa— a dish comprised of the concave pasta and rapini, also known as turnip tops.

Other common pairings with Orecchiette are ricotta, pancetta, ham, and cream-based sauces, but this is a pasta that can be paired well with most ingredients.

Although Orecchiette has become easier to find in areas all over the world, it remains the pride and treasure of Bari, Puglia and other southern regions of Italy. Today the pasta can be enjoyed by anyone at any time, but in ancient Italy it was considered a Sunday pasta, to be served only once a week. The only exceptions to the rule were religious holidays, including Christmas and Easter, as well as special occasions like birthdays and christenings.

The love for “small ears” has spread greatly since Orecchiette’s inception. Now, people can experience the same joy as those in Italian communities right from the comfort of their own homes. One taste of Orecchiette and your taste buds will take a trip back in time, enjoying over seven centuries of tradition, history and love from the hands that shaped it.

A plate of Flora Homestyle Orecchiette Pasta tossed in your favorite sauce pairing is a sure way of bringing worldly traditions and universally positive sentiments to your dinner table.