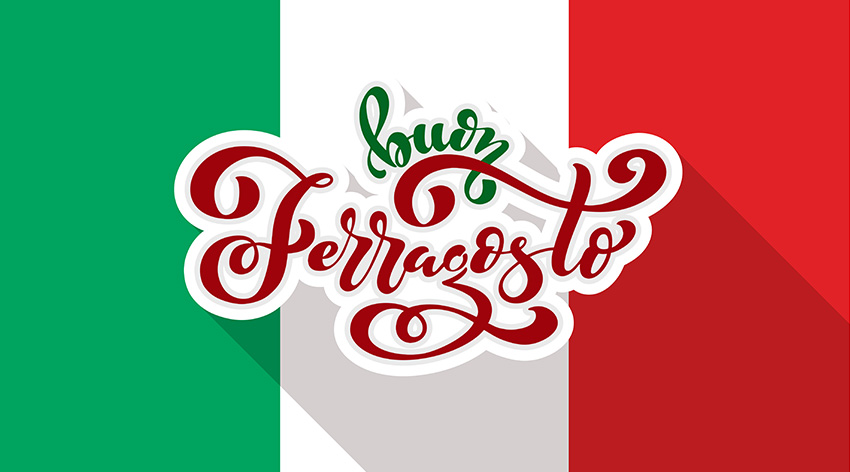 Ferragosto has been celebrated in Italy since 18 B.C.!

Originally a holiday that allowed citizens a day rest after weeks of intense hard work harvesting crops, and conveniently named for Emperor Augustus to commemorate his victories in key battles.

In modern-day Italy, Ferragosto celebrations typically begin on August 15 and can last several weeks. Taking place during the height of Italian summer, many Italian residents take this time to go on vacation, leaving their urban areas to head for the hills—or for the coastline. So many take off that much of the country actually closes for weeks at a time.  Some of the Ferragosto traditions include joining friends and family, and of course, this being Italy, by creating memory-making meals.

It’s typical to host bonfires, beach parties and large gatherings. While most events during the holiday are private, certain areas of the country will host special public events to mark the day. Oftentimes, people get together to enjoy the Feast of Assumption, which commemorates the moment when Roman Catholics believe the Virgin Mary was assumed, body and soul, into Heaven. Many cuisines enjoyed at the feast are simple in ingredients but exquisite in taste. Common foods eaten at that time include olives, seafood cheeses and carpaccio, a dish consisting of thinly sliced meat served with a sauce.

A popular lunch eaten while celebrating is a stew of slow-cooked chicken with bell peppers called pollo coi peperoni. Popularly served alongside it are rice-stuffed tomatoes called. While pasta dishes are not as commonly served during Ferragosto festivities, many locals are known to make dishes like pasta ‘ncaciata, an oven-baked pasta that, while a bit more complex to make, has an incomparable variety of flavors. To make the pasta, combine penne with tomato sauce or ragù, meatballs, salami, chunks of cheese, sliced hard-boiled eggs and fried aubergines. Next, pour the pasta into an oven-safe dish, add a layer of freshly grated cheese and bake at 375 degrees for 15 to 20 minutes. Once it’s done, your house will be flooded with delicious savory fragrances, putting you in the best of spirits for your celebrations.

Family-style dishes are typically served during this time to promote togetherness and union. One dessert often shared among friends and family members is biscotti, a sweet cookie with different names according to different parts of Italy. The dessert is called ciambelline in the Emilia-Romagna region, known in Pitigliano as biscotti di mezz’agosto and referred to as zuccherini montanari in the Bologna province.

Whether you’re hosting a grand gathering or an intimate meal with your loved ones, remember to prepare your favorite dishes for the festive season using authentic ingredients by Flora Fine Foods, and don’t forget to say, “Buon Ferragosto!” the standard greeting to wish each other happiness throughout the festivities.